Desmond has been dodging law enforcers since an Olongapo City Regional Trial Court (RTC) judge issued two (2) warrants for his arrest last month, for allegedly gypping a business partner of over $2 M in investments.

The warrants are for “syndicated estafa,” a non-bailable offense, and “simple estafa” for which Judge Richard Paradeza set bail at P80,000.

The cases stemmed from the complaints of businesswoman Virginia delos Santos – Dio who claims her investments as partner in the theme park was used by Desmond for his personal benefit, instead.

Dio filed the complaints in 2004 but due to motions and counter-motions from both sides, it reached the Supreme Court which ordered the RTC in June this year, or ten (10) years later, to proceed to hear the cases against Desmond.

“No other than the Supreme Court declared that there is probable cause against the accused for the crimes charged, hence, the issuance of warrants for the arrest of the accused must follow as a matter of procedure,” Paradeza said.

“Desmond is now a fugitive, having chosen to take flight instead of facing the charges against him,” said lawyer Enrique dela Cruz of Pecabar Law Office, counsel for Dio. “It is to his interest to submit himself to the legal process because his continued defiance by hiding from the law could be construed as an admission of guilt,” he added.

Authorities returned empty-handed in various tries in arresting Desmond in several locations in the Subic Bay Freeport, Olongapo City, Zambales province and other places in the country.

He is believed to be in hiding and have not left the Philippines yet despite being an American citizen.

Meanwhile, Dela Cruz announced that the reward for information leading to the arrest of Desmond has been raised to P1M (1 m = 3’3), thus, raising the chances of finally having the “fugitive” captured to face trial. 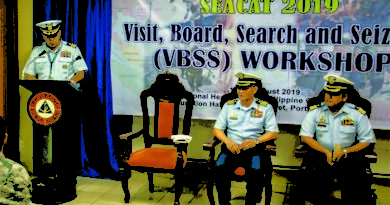