IBA, Zambales — At least 15 quarantine facilities in the province have been identified by LGUs and are now being equipped with necessary staff, equipment and supplies to house persons under investigation (PUIs), Gov. Hermogenes Ebdane Jr. has announced.

“Eleven municipalities have so far each identified one quarantine site for the locality, while two others—the towns of Palauig and Sta. Cruz—have two sites each, so all the LGUs have been accounted for,” Ebdane said on Wednesday.

In response to the governor’s urgent call for preparedness, local government units (LGUs) in the 13 towns of Zambales are setting up local quarantine facilities and border disinfection units to strengthen local capacity to combat the spread of the new coronavirus disease (Covid-19).

“On top of these, the provincial government is maintaining two other quarantine sites—the President Ramon Magsaysay Memorial Hospital (PRRMH) here in Iba, and the Bahay Pag-asa in Botolan town,” he added.

PRMMH, under Ebdane’s Monday order, was designated for exclusive use of Covid-19 cases. As of Wednesday, April 1, all regular patients have been transferred to the two district hospitals in the province, San Marcelino District Hospital and Candelaria District Hospital. Others, according to the governor, opted to continue treatment at the Kainomayan Community Hospital in Botolan.

“It is important to segregate cases of Covid-19 to prevent possible spread through the sharing of the same facility,” the governor explained.

On Sunday, Ebdane gave all LGU units the order to implement more stringent measures, stressing that preparedness be at the core of the provincial action plan against Covid-19.

“It is very heartening how community leaders and officials eagerly complied,” he said, adding that he has been inspecting proposed quarantine sites since Tuesday.

Among the defense measures now being practiced in Zambales is the disinfection of vehicles going in or out of the province.

A mandatory quarantine is required for all outsiders who wants to enter the province. New arrivals will be held for 14 days at facilities in the border towns of Sta. Cruz and Subic, according to Ebdane. Exempted from this policy are travelers on vital missions like delivery of food and medical supplies, and others provided under the rules of the Enhanced Community Quarantine declared by President Rodrigo Duterte, he clarified.

Ebdane said that some local officials even took this a step further and established their own disinfection stations at the border of their own towns or barangay.

Meanwhile, other LGUs have begun doing inventory of their current stock of supplies of food and medicine after the governor ordered record-keeping of necessities as part of emergency response.

A number of private doctors and other medical personnel in the locality have also answered Ebdane’s call for enlistment as health “reservist” in their towns.

“In times like this, cooperation is the most important contribution anyone can make. It would be easier for us to contain, and consequently eradicate the virus if the community acted as one,” the governor said.

Statistics released by the Zambales Provincial Health Office (PHO) showed that as of March 31, only 4,307 persons under monitoring (PUMs) have remained of the 12,859 that the province had recorded since day one of the Luzon-wide Enhanced Community Quarantine.

“More than 8,000 had already been cleared, as they did not exhibit any symptom of Covid-19,” Ebdane said, adding that those cleared, however, remain at home under quarantine rules.

The PHO also indicated that 118 of those 247 tagged as persons under investigation (PUIs) in the province have completed the 14-day observation period without any of the symptoms progressing to require testing.

Of the remaining 122 PUIs, eight have already tested negative of the disease and six are on hospital care. Three were confirmed positives, and one of them, a 90-year old resident of Castillejos town, has died.

“The numbers here are small compared to other areas in the country, but this does not mean we can relax our vigilance,” Ebdane clarified. “Zambales, in fact, has just stepped-up response to the threat,” he added. ### 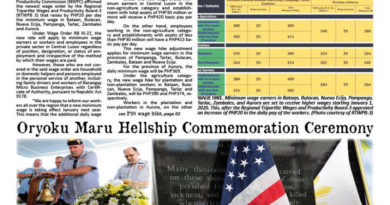 Bataan back to MECQ