A GROUP of former employees of US Naval Base, Subic Bay surprised US Ambassador to the Philippines Philip S. Goldberg with a friendly rally during his visit this morning at the Subic Bay Freeport, the former US base that shut down in 1992 and is now a bustling business hub and Freeport.

“We are here to show our continuing support and advocacy of the lasting friendship between the Philippines and the United States,” Ernesto Tawatao, leader of the group said.

Goldberg was on a scheduled low-key tour of Olongapo City and the Subic Bay Freeport but the aging former US base employees were undeterred in their resolve to convey their message to the Ambassador who , after meeting with Subic Bay Metropolitan Authority (SBMA) Chairman Roberto V. Garcia at Bldg. 229, gamely alighted from his vehicle to shake their hands and exchanged pleasantries.

“I appreciate your message and what you’re doing here,” Goldberg told the former base employees before proceeding with his tour of the Freeport with Garcia.

A week-long grand reunion of former base employees, the first of what is hoped to be an annual activity, is set on March 16-22, 2014 in the Freeport and nearby Olongapo City.

The Olongapo City Council has passed a resolution declaring every third week of March as Former US Base Workers’ Week in recognition of the formers US base employees’ contribution to the city’s growth and development.

“We built this city on rock and roll, so to speak,” said Tawatao who co-chairs with former base employees union president Roberto Flores the association the group has registered with the Securities and Exchange Commission. 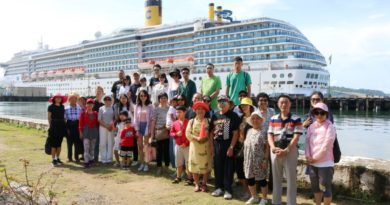