Manila – The U.S. military turned over four ScanEagle Unmanned Aerial Systems (UAS) worth Php200 million ($4 million) to the Philippine Air Force (PAF) during a ceremony at the Clark Air Base in Mabalacat City, Pampanga on October 13. These platforms will provide additional capabilities in unmanned Intelligence, Surveillance, Reconnaissance (ISR), and in support of counterterrorism, humanitarian assistance and disaster relief efforts.

CDA Variava and JUSMAG officials delivered the UAS systems to the PAF to increase the Armed Forces of the Philippines’ (AFP) domain awareness and border security capabilities.

“We remain committed to our promises on helping modernize the Armed Forces of the Philippines, and we hope this will further strengthen our combined capabilities in working together towards a free and open Indo-Pacific,” said CDA Variava.

The United States provides the AFP with grant assistance and expedited sales of arms and munitions to support its modernization goals and urgent maritime security, counterterrorism and humanitarian assistance, and disaster relief requirements.

The Philippines is by far the largest recipient of U.S. military assistance in the Indo-Pacific region. Since 2015, the United States has delivered more than Php50.6 billion ($1.06 billion) worth of planes, ships, armored vehicles, small arms, and other military equipment to the Philippines, while training side-by-side with our Filipino allies.

Bataan High School for the Arts to be built in Bagac 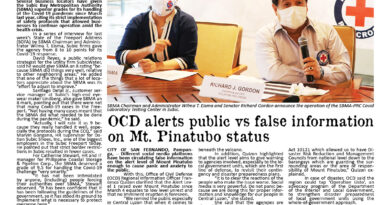