MS Ovation of the Seas, the latest in the Quantum-class cruise vessels of the Royal Caribbean International cruise line, arrived here on Friday for its maiden port call.

Subic Bay Metropolitan Authority (SBMA) Chairman and Administrator Wilma T. Eisma noted that the Ovation of the Seas was the biggest ship to ever dock in Subic in its long history as a naval facility.

“This ship is huge, even bigger than the so-called super-carriers of the US Navy that used to dock here when Subic was still a military base,” Eisma pointed out.

“So, as you can see, we have now taken this cruise ship program several notches higher. We started in February this year with Costa Atlantica, which has a passenger capacity of just over 2,000, and now we have this—Ovation of the Seas with almost 5,000 passengers and crew,” she added.

“We are glad that in its own little way, Subic is able to help in the national government effort to raise tourist arrivals in the country and generate more income for local people,” she added.

The Ovation of the Seas is an 18-decker ship that measures 348 meters long, has a gross tonnage of 168,666, a maximum occupancy of 4,905 passengers and, along with its sisters Quantum of the Seas and Anthem of the Sea, is considered the sixth biggest cruise ship in the world today.

To accommodate cruise ship passengers who wanted to visit tourist attractions in Subic and nearby communities last Friday, organizers had to field more than 50 tourist buses, the SBMA said.

World Dream, which has a capacity of 3,400 passengers, is listed as the 19th biggest among the cruise ships in operation today.

She said the SBMA and the national government have allocated a total of P135.8 million for the port infrastructure development program.

“With the completion of these three port projects by next year, we expect to see more attractive and more efficient port facilities, more customers coming in, and more income for the port,” Eisma added.

According to SBMA Tourism Department manager Jem Camba, at least 20 cruise ship arrivals have been calendared here for this year. These include three arrivals each for the month of June, July and August.

Another Royal Caribbean vessel, the Voyager of the Seas, has been scheduled to arrive here in August.

“Local communities, as well as business establishments in the Freeport, definitely earn a lot from the arrival of cruise ships because the passengers buy local products, eat at restaurants and sample local cuisine, and enjoy themselves at the various tourism establishments in and around Subic Bay Freeport Zone,” she said. 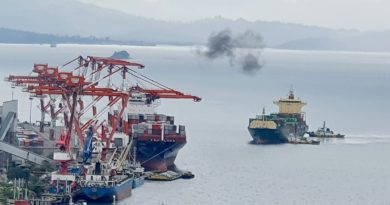 1,370 examinees to take civil service exam in Bataan in March