In line with the universal quest to develop clean and renewable energy, the Olongapo City government has recently mounted three solar light panels at the ridge of Rizal Triangle’s roofs.

“The photovoltaic (PV) cells which convert sunlight directly into electricity are connected and packaged into a frame more commonly known as a solar panel,” he added.

Sebarrotin explained that the solar panels installed will collect light energy from the sun during daytime to generate and supply lighting at the Rizal Triangle where most of the city government’s activities and youth ball games are held.

“This experimental project is not only for the continuous improvement of the city’s parks and landmarks; it is also the city’s first venture to explore and study the possibilities of harnessing power from the sun for other lighting projects,” Olongapo Mayor James “Bong” Gordon Jr. said.

The installation of solar panels is part of Mayor Gordon’s agenda for sustainable development, a global concern that seeks to address the balance between the earth’s carrying capacity and resources with the needs of the present and future generations.

“Scientists and researchers today continuously search for ways to eventually lower the cost of manufacturing solar panels and to deal with the challenge of how to efficiently store the absorbed energy from the sun to effectively utilize it at night,” said Sebarrotin, also the Supervising Agriculturist who oversees the monitoring of the man-made artificial reef installed in the deep sea of Brgy.Barretto last month.

“This project marks our first baby steps to going solar. Considering the needed technology and resources for larger solar projects, it may take the city a longer time to cope with the global trend to develop renewable sources of energy. But at least, we are taking steps to get there,” said Mayor Gordon. 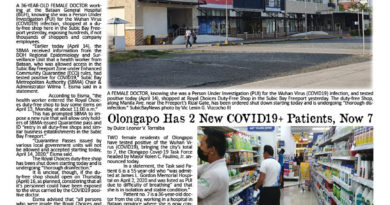 SUBIC FROM THE BAY