FESTIVITIES of the Former Base Workers’ Week ended yesterday with a kilometer-long parade from Magsaysay Drive in Olongapo City to the Subic Bay Freeport’s Remy Field where the closing program was held.

With the Olongapo City Marching Band on the lead and the Subic Bay Metropolitan Authority (SBMA) Band bringing up the rear, close to a thousand former base employees of various activities of the former US Naval Base in Subic braved the afternoon sun and aging legs carrying placards stating their advocacy of renewed US military presence for economic and national security reasons.

“This is the best that we can do for the country, in general,” said Ernesto Tawatao, co-chair of the 1st Grand Reunion of Former Employees of US Naval Base, Subic Bay, “we would like the world to know that this place was prosperous when the base was here and that China would not be bullying us now if US Naval forces never left Subic.”

Several thousand spectators lined the parade route, awed by the sight, and for others, the realisation that the Subic Bay Freeport was formerly a US Naval Base employing scores of Filipino workers and serving as the backbone of the local economy.

US Naval Base, Subic Bay was shut down in 1992 after the Philippine Senate rejected a treaty that would have extended US basing privileges in the country, triggering massive dislocation and unemployment that almost reduced Olongapo and neighboring communities into ghost towns.

“We want the Visiting Forces Agreement (VFA) enhanced. We want more US ships to visit Subic because it is not only good for the local economy but to national security, as well,” Roberto Flores, co-chair of the 2014 grand reunion and former president of the US base’s labor union. “If possible, have the constitution amended to lift the ban on basing of foreign military in the country,” Flores added.

A signature drive has been launched in conjunction with the reunion, calling for increased US military presence in the country, specially  Subic. (VVV) 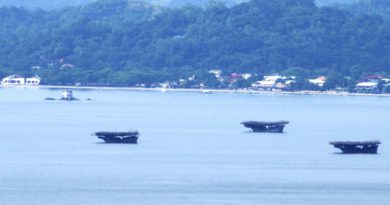 Contrary to Allegations, SBMA will not Collect Port Charges from Overstaying Vietnamese Fishermen

Owner and operator of a premier leisure destination at Clark Freeport Zone in Pampanga, Widus International Leisure Inc. (WILI), has