SUBIC BAY FREEPORT — The Wuhan Virus (COvid19) pandemic has created a growing demand for cooling fans as part of various medical equipment, prompting a Japanese firm here to devote its operations to the production of the items.

According to Koichi Uchibori, president of Sanyo Denki Philippines, Inc. (SDPI), “the company’s cooling fans are used by companies like Siemens, Inogen and Hitachi for various medical equipment, including mechanical ventilators that move breathable air into and out of the lungs of patients who are physically unable to breathe.”

But due to the enhanced community quarantine (ECQ) rules that required export-oriented businesses to house their staff within the Freeport zone, Uchibori said that company operations have been drastically reduced to 10 percent of the previous capacity.

As of last February when the ECQ was not yet in place, Sanyo Denki had a total of 4,273 as workers, including those under contract with manpower services. Uchibori said the company now operates with only 600 workers who are housed in various hotels inside the Subic Bay Freeport.

“It is expensive keeping them in hotels, and also paying them double,” Uchibori noted. “Still we are ready to take in more, but the problem now is where to house them,” he added.

Uchibori also said that despite the huge overhead for the company’s current operations, SDPI is not charging their customers any extra amount for their in-demand products.

With this, Chairman Eisma assured Sanyo Denki officials that the SBMA will help in easing up the supply chain for the company because of its vital role in the fight against Covid-19.

She also expressed gratitude to the company and its workers for continuing to produce the vital components needed for ventilators and other medical equipment.

“We will help you find ways so that shipment of your raw materials won’t be delayed, and so that you can employ more workers to step up production of this very important product,” Eisma told Uchibori and Yamazaki.

“Subic salutes you for your important role in the fight against the Covid-19 pandemic,” she added. (Iya G. Oliva) 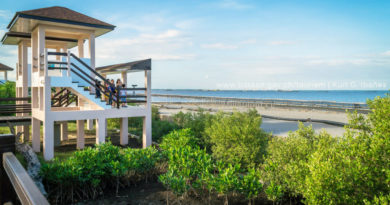 Zambales’ most wanted nabbed in the Subic Bay Freeport