The local government of Olongapo City Wednesday passed a resolution in support of the request of Subic Bay Metropolitan Authority (SBMA) employees calling for the implementation of the long overdue salary standardisation.

Mayor Rolen Paulino and SBMA Director Cynthia Paulino attended the regular session of the City Council to support the passing of the resolution.

The resolution was passed unanimously on Wednesday.

In the resolution, the Council asked President Benigno Aquino to grant the request of SBMA employees to implement the Salary Standardisation for state workers in Subic whose salaries are way below current standards.

Mayor Paulino, a former Subic volunteer himself said that he is all for the implementation of the salary standardization for SBMA employees.

Mayor Paulino added that he had already called all the Mayors adjacent to the Freeport to pass the same resolution in their respective municipalities to support the SBMA workers.

On Wednesday, the third day of the mass action by SBMA employees, workers lighted candles in front of Bdlg. 229, the administration building of SBMA.

Richard Tabangin, a member of the SBMA Employees Association (SEA) that coordinated the protests said SBMA employees have been seeking the approval of the Office of the President since 2011, to no avail.

Tabangin added that the salary of SBMA employees is way below what other GOCC’s and local government units are getting.

SBMA Director Paulino said the board has already approved in its 2015 budget the amount of P400M for the salary standardization and 10% salary increase.

A request to the office of the president for President Aquino’s approval has also already been sent. 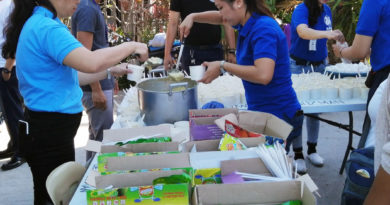