MANILA — Senator Richard Gordon on Wednesday warned against declaring a state of calamity in the regions hit by the measles outbreak, as it could give some politicians access to calamity funds.

“This is the election period, and excuse na naman yan (this is another excuse) to spend money…What is important is that we show that we’re doing something to address the problem. What is important here is a notice to all to catch up with our immunization program,” Gordon said.

Gordon, who heads the Philippine Red Cross, said reported measles cases are still manageable and there is no justification to declare a state of calamity.

“There’s no need to create a national emergency here. We’re not in danger of a pandemic or an epidemic right now. It’s manageable, therefore what you need right now is a call to arms to make sure that everybody is conscious of the need to immunize and that kids must be immunized,” Gordon said.

“We don’t have the numbers to justify that. So let’s not go slip-shod into something that we are not ready for, that doesn’t call for it,” he added.

Meanwhile, Senator Sonny Angara called on the Department of Health to ensure the stable supply of measles vaccines, stressing this as “essential” in the fight against the infectious disease.

“The DOH must ensure consistent and adequate supply of measles vaccines in anticipation of increased demand as many people rush to protect themselves and their children from the virus,” Angara said.

Angara also appealed to parents to have their children immunized against measles in any government health center, noting that the vaccines are administered for free.

Data from the DOH-Epidemiology Bureau revealed that from Jan. 1 to Feb. 9 this year, a total of 4,302 measles cases have been reported, with 70 deaths. (PNA) 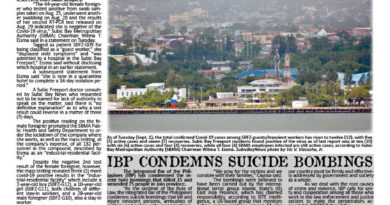