The Subic Bay Metropolitan Authority (SBMA) hosted the festivities here, as hundreds of government workers joined a fun walk in the early morning of September 15, and then participated in fun games at the Subic Gymnasium.  Atty. Ramon Agregado, SBMA senior deputy administrator for support services, welcomed the delegates on behalf of SBMA Chairman Roberto V. Garcia.

During the welcome ceremony, Atty. Karin Litz P. Zerna, Region III director of the Civil Service Commission (CSC), said that Central Luzon has a lot of exemplary public servants good enough to make it to the list of national CSC awardees who will be recognized this month.  Among the recipients, she added, is Marilou Dungog of the SBMA Public Relations Department, who was cited for her work in helping establish alternative livelihood projects for fisher folk in the Subic Bay Freeport area.

Olongapo City Mayor James Gordon Jr., meanwhile, said the Civil Service Commission had gone far in terms of improving the lives of the Filipino people, and public servants have proven themselves worthy of being in the service, as evidenced by the country’s economic growth today.

For his part, Zambales provincial administrator Engr. Jun Runstedt Ebdane described government employees as the “backbone of the government who make delivery of service to the people not only possible, but indispensable.”  “Dapat may yabang natin sabihin na kawani ako ng Pamahalaang Pilipinas; isa akong lingkod-bayan,” Ebdane also urged his fellow civil servants, reminding them to be proud of their role in nation building.  The CSC anniversary celebration also provided an occasion for government employees to bond and engage in fitness games, and promote local culture as well.

The celebration was headlined by a three-kilometer fun walk dubbed as “Race to Serve” which started at 6:00 in the morning. About 250 delegates from various local government units walked altogether from the Boardwalk Park here to the gym where they also held fun games.  Edwin Sunglao Sr., personnel specialist at CSC Zambales, said the games were made part of the program because social gathering is a rare opportunity among the public servants in Zambales and Olongapo.

The program was also interspersed with cultural presentations, like a dance number by delegates from Masinloc town.  In the same program, the Harbor Point mall in the Subic Bay Freeport and SM mall in Olongapo announced that they are offering a 5-10 percent discount privilege for government employees who will shop within the month of September, which has been designated as Civil Service month.

eanwhile, the SBMA Human Resource department said that it has designated two buses to provide SBMA employees with a free ride from the Freeport gates to SBMA offices every Monday, starting September 3, in honor of public servants and in celebration of the anniversary of Philippine Civil Service. 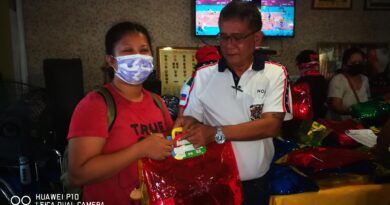 Subic Freeport is ready for summer 2016

SM Continues to be PWD-friendly