March 17, 2012May 26, 2012 Vic Vizcocho 0 Comments
MY CITY, MY SM, also appropriately called WOW Olongapo honored Philippine Red Cross Chairman Richard Gordon and beauty queen Darlene Carbungco-Isip, who have both brought great honor to Olongapo, their hometown.
Chairman Gordon, who is widely considered the Father of Volunteerism in the Philippines, is a strong advocate of transformational leadership.
As a three- term mayor, he made Olongapo a model city.
As Founding Chairman and Administrator of the Subic Bay Metropolitan Authority, he implemented a plan for its long- term development after the departure of the US Navy from Subic Bay in the 1990s.
With his grit and passion, he made Subic Freeport a model for volunteerism as well as a business and investments hub.As Secretary of Tourism, his Wow Philippines campaign jump started not only international but also local tourism in the country.
Darlene Carbungco-Isip, on the other hand, has brought attention to the beauty of her hometown not only on the national but also regional stage when she was named Mutya ng Pilipinas 2001 and Fourth Runner Up in the Miss Asia-Pacific pageant in the same year.
The program, hosted by Marlon Bravo, began with the Koro Colegio de San Columbano’s moving rendition of Lead Me Lord. A delightful Bird Show by Zoobic Safari, which showcased native species like the owls and the hornbills; as well as video presentations about Olongapo and the honorees wowed mallgoers who packed the area.
Guests led by Olongapo City Mayor James Gordon, Jr., SBMA Director and First Lady Anne Marie Gordon, SBMA Chairman and Administrator Roberto Garcia, and former DOT Secretary Mina Gabor enjoyed going through the showcases featuring Olongapo and its natural wonders.
They, along with SBMA Director Gerald Sam del Rosario; City Councilors Eyrma Yvette Marzan, Aquilino “Jong”Cortez, and James “Bugsy” de los Reyes were welcomed by SM officials led by Vice President for Marketing Millie Dizon, SM Supermalls AVP for North Luzon 2 Juancho Sibal, SM City Olongapo Assistant Mall Manager Renalin Briones and SM City Pampanga Assistant Mall Manager Junias Eusebio.
In keeping with the events adventure theme, zebra printed panels, Indiana Jones dressed performers, die-cut renditions of wildlife animals on the welcome arch delighted guests who came in animal printed attire.Mallgoers crowded around the yacht showcase featuring the interiors of a real yacht. The citys awards were displayed in this showcase, as well as vignettes about the Gordons of Olongapo and Chairman Richard Gordon.
The rainforest showcase, on the other hand, gave guests a glimpse of Olongapos breathtaking rainforests and natural wildlife, with native birds like owls and hornbills guarded by indigenous people in their costumes.
The My City, My SM launch in SM City Olongapo is the first for 2012, the third year in this Tourism oriented campaign that features the many cities in the Philippines where SM malls and stores are located.So far, the My City, My SM roadshow has visited 24 cities in the Philippines, with prominent personalities in each area as tour guides.
It began just in time for the Giant Lantern Festival in December 2009 with I Left My Heart in San Fernando with internationally acclaimed film director Brillante Mendoza and Mutya ng Kapampangan Nicolette Henson.In 2011, My City, My SM honored Don Ado Escudero and Ramon Magsaysay Awardee Dr. Jaime Alip in the Lakeside Charm of San Pablo; former Prime Minister Cesar EA Virata and Island Cove and Leisure Park Managing Director Gilbert Remulla in Celebrating Cavite; and former Markina Mayor Marides Fernando and the citys shoemakers and retailers in My Marikina.
It also highlighted Dr. Jose Rizal’s 150th birth anniversary in Come Home to Calamba with Rizal descendant Barbara Gonzales and Marc Cosico; as well as two National Artists  Bienvenido Lumbera in I Love Lipa and Virgilio Almario in Bravo Baliwag; before making a grand finale in December with Ang Bayan Kong Tarlac with social entrepreneur Bam Aquino and Governor Vic Yap.My City, My SM is a joint project of SM and the Department of Tourism with support from the Philippine Star.(PR-SMOL)
FacebookTweetEmailPin 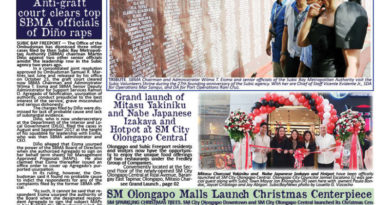