THE arrest of three (3) drug pushers and the seizure of close to a million peso worth of methamphetamine hydrochloride or shabu within the Subic Bay Freeport over the weekend has brought to fore the need for a more clear cut and thorough cooperation between the Subic Bay Metropolitan Authority (SBMA) and the Philippine National Police (PNP).

According to a report from the SBMA LED, law enforcers first apprehended Reygine Cuaresma, 27 years old and a security guard working for a private firm in the Subic Bay Freeport, and Laverne Gabriel y Echalar, a 39-year old resident of Dinalupihan, Bataan who worked as a trailer driver for a trucking firm here.

The two were arrested on Wednesday, May 6, after picking up a poseur-buyer at the Subic Gateway Park. Police said the two yielded several plastic sachets containing suspected shabu and, upon investigation, pointed to Elmer Padel Sr. y Lila as their supplier.

Padel, a 42-year old resident of Subic, Zambales and an on-call dock worker here, was arrested the following day, May 7, after he agreed to meet with Cuaresma and Gabriel at a gasoline station near the Tipo Gate to receive “remittance” from drug sales.

Padel, in turn, pointed to two other suspects as sources of the illegal drugs, but police said subsequent operations against them turned out negative.

Eisma congratulated the operatives for the arrest of the three suspects, but also urged them to step up the fight against criminals.

PCol. Benjamin De Leon Sembrano, Olongapo City Police Office (OCPO) Chief, told Subic Bay News (SBN) that drug pushers are taking advantage of the PNP’s absence in the Freeport, as the SBMA LED has the responsibility and task of the Zone’s security and safety.

Sembrano said tactical interrogation revealed that truck drivers and workers of Freeport Zone companies are the clients of the drug dealers.

“We should strengthen and widen police operations in the Freeport to deter illegal activities during the ECQ because some culprits may be emboldened to commit crimes now that they see there are only a few people around,” Eisma said.

“We should prove these criminals wrong,” Eisma said. “You’ve done a good job getting the pushers, so I say go after the users too, because pushers won’t be selling illegal drugs when there is no demand for the stuff,” she added.

Eisma also stressed that the SBMA “is solidly behind the President’s war against illegal drugs.”

At the same time, the SBMA chief noted that despite ECQ constraints that minimized the operations of the Subic agency to essential services, “security and law enforcement units continue to be fully operational.”

“Patrols are, in fact, more frequent these days because there are a lot of businesses that have temporarily closed their facilities and the SBMA is looking after these, too,” Eisma pointed out.

Bataan back to MECQ 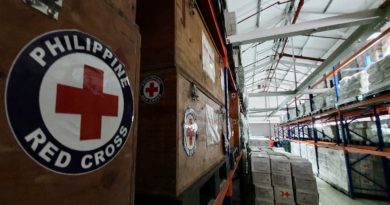 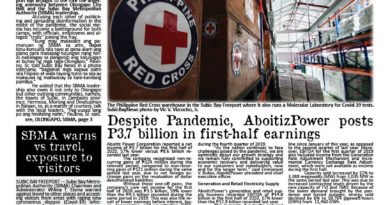