CITY OF SAN FERNANDO, Pampanga — Department of Public Works and Highways (DPWH) completed the concreting of the 3.753-kilometer road in sitio Durumugan in barangay Kalawakan in Doña Remedios Trinidad, Bulacan which is seen to boost the local eco-tourism industry.

“Barangay Kalawakan is located at the Sierra Madre Mountain Range and is touted as Bulacan’s last frontier. Eco-tourism is considered as one of the major economic drivers of the barangay with the presence of tourists’ attractions, like the Balistada Hills, Tila Pilon Hills, Talon Pari Falls, and Mt. Pinagbendarahan – a popular destination for trekkers,” Bulacan 2nd District Engineer George Santos said.

“Since 2011, DPWH has been into road projects construction in Bulacan, road systems that will connect barangay Kalawakan to other towns of Northern part of Bulacan. These have considerably changed the lives of residents, making easier for them to transport agricultural products to the nearby markets in San Ildefonso and San Miguel,” Santos added.

Tourism destinations in barangay Kalawakan will now be more accessible with the improvement of the barangay road network.

The village is bordered by barangay Pias in General Tinio and barangay Makabaclay in Gapan City, Nueva Ecija; barangay Umiray in Dingalan, Aurora; and barangay Malibay and Sibul in San Miguel, Bulacan. (PIA 3) 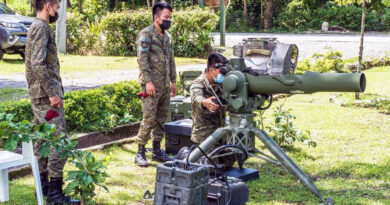