OLONGAPO CITY – Fire gutted early this morning an old structure that houses a carinderia and Videoke Bar along Gordon Ave. at Bgy. Asinan, across the street from the office of the former Public Utilities Department.

According Major Camilo Pablo (PNP ret.), head of the Office of Traffic Management & Public Safety (OTMPS), the fire struck around 1:30 AM and c0mpletely consumed the building built of light materials in less than an hour.

A resulting power outage was experienced in Bgys. Asinan, Pag-asa, East Tapinac and Kalakake, but was restored in most parts after the blaze was declared “fire out.”

City Mayor Rolen Paulino proceeded to the scene and directed firefighting, crowd control and safety efforts during the blaze, that as of 3:00 AM, reportedly had no human casualties.

Videoke manager Lanie Flores said the establishment has not been operating lately and that she and three other females live there as caretakers.

“Mukhang may magnanakaw pong pumasok na nakaiwan ng may sinding sigarilyo (It seems a thief entered the building and left a lit cigarette),” Flores said speculating on the cause of the fire that started from an unoccupied room upstairs. “Malimit po kami pasukin ng magnanakaw dahil siguro alam nilang puro babae kami diyan (We are often victimized by thieves maybe because they know that the occupants are all female),” she added.

The cause of the fire and cost of damage to property have yet to be ascertained, according to Pablo. (VVV) 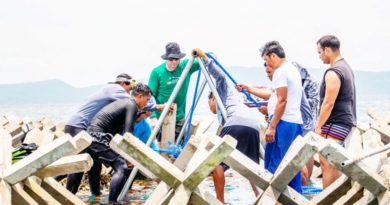