Ian Short, 55 , a retired firefighter from Yorkshire London United Kingdom, appears like any other foreigner you see around the Subic Bay area, but beneath the quiet, intense rugged exterior, you’ll find a man who has dedicated his life to being a first responder and firefighter.

Recently, he became a volunteer member of the Olongapo Firefighting team.

Short is also a man with a very big heart not only for firefighters, but for children, as well. During a visit in 2017, he became acquainted with a group of U.S. veterans, who were involved in providing Christmas presents for under privileged Filipino children.

He returned to the U.K. and began to tell his friends about the Christmas program, and encouraged them to donate toys and clothing. With the effort, he was able to ship 10 boxes of donations benefiting some 2,455 Filipino children.

Short also went to work in getting local fire stations in the U.K. and collaborated with Roy Barraclough, fire officer for 39 years who worked for a fire service humanitarian charity agency called Operation Florian that is based in the United Kingdom, to donate firefighting gear (boots, helmets, turnout coats and HAZMAT suits) for use by his colleagues in Olongapo. The said charity agency provides help, assistance, cooperation, equipment and training for firefighters around the world.

According to Short, firefighting gear doesn’t stay in serviceable condition for long, and what his fellow firefighters had was in need of replacement. His dilemma was how to get it to the people who really need it. He had already been working with an expat owned company in Olongapo, Asia Pacific Security Solutions (APSS) which specializes in disaster response training, and the Subic Bay Retired Activities Office (RAO), in shipping the donations for the children, so the firefighting equipment made it to the shores of Subic Bay with the gifts. His love and concern for his adopted country is obvious by his actions and the Subic community is very fortunate to have a humanitarian of his caliber among its ranks. Short is never short on ways to help his fellow man. (By Rossel De Guzman) 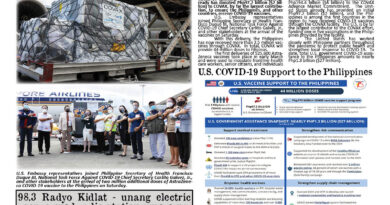