ABUCAY, Bataan— No Filipino should be a squatter in his own country.

This was the moving message of a top Gawad Kalinga (GK) volunteer to 2,200 students, youth and professionals who joined the 5,000 Heroes Run in Abucay on Saturday in a bid to shelter the homeless.

The fun run was touted to be the biggest held in Abucay, and was the first run for a cause held by GK Central Luzon in the region.

Proceeds of the run, which only had a registration fee of P20 for students and P50 for the regular, will go to the construction of houses in GK Abucay village where 24 families are already residing in a site complete with concrete roads, electric and water supply, livelihood center and recreation site.

“We hope that the participants will be inspired and we can tap them as volunteers in our GK community. From what I‘ve heard, kids paid for the registration out of their own baon. They exerted effort to give a contribution,” Ramos said.

He disclosed that 30 more houses will be built in the village starting this month. 10 houses will be funded by GK USA, 10 more from Abucay Mayor Ana Santiago, while private donors pledged to fund one house each—totaling to about P4 million.

The supportive mayor added that GK Abucay will be enhanced with a modern church, Day Care Center, health center and barangay hall.

“At present, we are fixing the water system of the site. We still have a lot in line for the village together with GK. Many people will benefit here,” Santiago said.

Residents of the spacious village expressed gratitude to Santiago and to GK for leading the Heroes Run and bringing thousands of students in their community.

“The run is a big help for us. It made the community known to the people,” GK Abucay Kapitbahayan Vice President Jocelyn Leaño said.

Big supporters of the run include the Department of Education, municipal government of Abucay, and civil society organizations. (CLJD/JMG-PIA 3)

Subic is next Guam 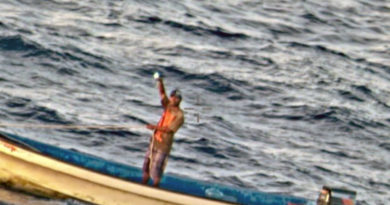