SUBIC BAY FEEPORT — The Subic Bay Metropolitan Authority (SBMA) has lined up activities highlighting members of the Ayta tribes in this free port, as the agency joins in the celebration of Indigenous Peoples (IP) Month this year.

SBMA Chairman Roberto Garcia said that the activities aim to show the agency’s appreciation of the role that the Ayta communities inside the former US military base have played in the conservation and development of what is now the relatively unspoiled forested portion of the Subic Bay Freeport.

“Owing to the presence of indigenous peoples within the Subic Bay Freeport, and in appreciation of their stewardship of their ancestral land, it is only but right to accord them the gratitude and recognition that they deserve,” Garcia said.  He also expressed the SBMA’s appreciation of the cooperation and support given by the indigenous Ayta tribes here to the economic development programs and projects of the agency within the Ayta’s ancestral domain.

October of every year was declared National Indigenous Peoples Month by virtue of Presidential Proclamation Order (PPO) 1906 signed by former president Gloria Macapagal-Arroyo on October 5, 2009.  The PPO is in pursuant of the earlier PPO No. 486, which Arroyo signed in 2003, and consistent with PPO No. 1124 issued by then President Fidel Ramos.  The order was created, “for the purpose of heightening nationwide peoples’ awareness and participation in celebration and preservation of indigenous peoples communities.”

In line with the IP Month celebration, Garcia has designated SBMA public relations manager Armie Belleza-Llamas to spearhead the preparation of a program to promote Subic Ayta culture.  This will commence with a flag-raising ceremony on October 8 in front of the SBMA main office on Waterfront Road, which shall be led by the members of the Pastolan Ayta community.

Members of the  Ayta Tribal Council of Sitio Pastolan in Hermosa, Bataan and the Council of Elders of Sitio Kanawan in Morong town will also be attending the ceremony.

In addition, a photo exhibit about Ayta culture and arts will be mounted at the Harbor Point Ayala Mall on October 26 to 31. Harbor Point will also be the venue of an Ayta cultural show to be highlighted by the “Ayta X-factor” singing contest on October 27. 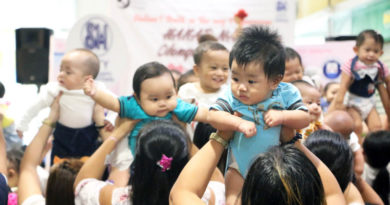