SUBIC BAY FREEPORT — This country’s premier free port will be again be the venue for Ad Summit Pilipinas, the country’s largest gathering of men and women in the advertising and marketing industry.

Bannering the theme “Come Out and Play,” the Ad Summit Pilipinas 2016 will be held by the Association of Accredited Advertising Agencies of the Philippines (4As) on March 9-12 at the Subic Bay Exhibition and Convention Center (SBECC).

Ad Summit 2016 chair Alex Syfu said in a media briefing here on Thursday that this year’s summit will have an amazing lineup of activities “to view all possibilities where there were none before.”
“’Play’ allows one to view possibilities where there was none before. It sees no obligations, just a wealth of opportunities,” Syfu elaborated.  “Ad Summit Pilipinas 2016 is an invitation for marketing practitioners to see the brighter side of things—to spot opportunities amidst industry challenges in order to propel brands into the future.”

Syfu added that “‘Come out and play’” is a mindset and a discipline in one—where it means to get out of the box of working too hard and opening the mind to play and enjoy.
“If you are not willing to take the challenge, then you might as well settle yourself for the ordinary set-up,” he said.

Syfu also noted that there is “a constant need to shake the community out of its comfort zone, to keep it from falling into the trap of focusing on the trials that seem to plague us these days.”
The forthcoming Ad Summit will bring in some of top-caliber speakers in the industry. These include business tycoon and PLDT CEO Manuel Pangilinan, award winning director Jose Javier Reyes, AQKA Shanghai’s Eric Cruz, Takahiro Hosoda of TBWA\Hakuhodo, Kazuaki Hashida of Hakuhodo Kettle, Fox Int’l. MD for SEA and head of ad sales Simon Dawes.

“People in the industry are happy with the 2014 Ad Summit that happened in Subic. And because of this, more people have clamored to hold it again in Subic in 2016,” Syfu announced.
Meanwhile, Subic Bay Metropolitan (SBMA) Chairman Roberto Garcia expressed elation over the Ad Summit organizers’ choice of Subic as the venue.

“This is a very good time for bringing the Ad Summit back to the Subic Bay Freeport,” Garcia said. “Subic is the Number 1 tourist destination in Central Luzon now, and this event will further promote this free port.”

He noted that the latest figures from the business sector here indicate that tourist arrivals in Subic last year have increased by 22 percent, while hotel occupancy grew to 69 percent.
“As for the theme of the Ad Summit, I can say that there is really a lot to play in Subic and a lot of very good opportunities here for you to grab and enjoy,” Garcia said.

The SBMA official also announced that the Subic agency has allotted P21 million for the renovation of SBECC to make it more convenient and comfortable for participants of events that will be held there, especially the Ad Summit Pilipinas 2016.

“The Ad Summit is a very good event for Subic. We hope the participants will have a good time during their stay here,” Garcia added. (30) 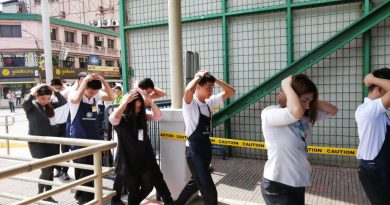