SUBIC BAY FREEPORT – Following the well-attended 2nd Subic Bay Maritime Conference and Exhibition last week, Subic Bay Metropolitan Authority chairman and administrator Roberto Garcia announced yesterday that the Port of Subic has kept up its growth momentum that began in 2012, on to the first quarter of the current year.

“For the past three years, the Port of Subic has continued to register positively in terms of revenues, gross registered tonnage (GRT), number of ship calls, and non-containerized and containerized cargos,” Garcia reported.

Garcia added that the port’s GRT was only 14 million in 2011, but expanded to 40 million last year, growing by 186 per cent during the three-year period.

Garcia said that SBMA is anticipating further growth, given the positive outlook for the country’s economy. This optimism seems to be bearing out, as the Subic Port’s year-on-year performance for the first quarter of 2015 shows the same uptrend it has enjoyed in the past three years.

According to Garcia, the entry of more domestic and foreign vessels that call regularly on the Subic has vastly improved the port’s connectivity to the world.

“We now have NYK Line, SITC, Maersk Line, APL, and Wan Hai vessels plying to and from major Asian ports like Kaohsiung, Tanjung, Singapore, Busan, Xiamen, Jakarta, Ho Chi Minh, Shanghai, and Surabaya, among others; as well as to and from Japanese ports such as Tokyo, Nagoya, Osaka, Chiba, and Kobe,” Garcia said.

Garcia also noted that the Subic Port successfully managed to accommodate the sudden surge in container shipments at the height of the Manila congestion last year, proving its capacity and readiness to handle volume shipments.

“This year we aspire to hit a target volume of 120,000 TEUs, or 20 per cent of the 600,000-TEU combined annual capacity of the port’s New Container Terminals 1 and 2, in line with our vision to make this Freeport the premier logistics hub north of Metro Manila,” Garcia revealed. 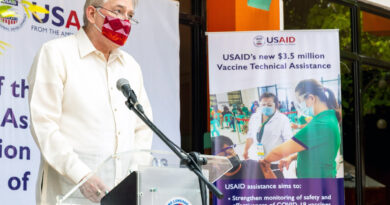