IBA, Zambales — To mark the end of 2012 and usher in the coming new year, the provincial government of Zambales sponsored a three-day festival that featured fun games, sports competitions, concerts and fireworks display, adventure treks, a “boodle fight” for 15,000, as well as a pageant for “large-sized” beauties.

Governor Hermogenes Ebdane, Jr. said the Kalighawan Festival, which was launched under his administration in 2010, has become an annual tradition to gather Zambaleños together in the spirit of thanksgiving for successes in the past year and to welcome better opportunities in the coming year.

“This is a time to celebrate what we have accomplished together, and to enjoy ourselves,” the governor said at the close of the festival on December 30, which also marked his birthday. “We have been at this for the past three years, but now we have a bigger program, with more towns involved and more people sharing with us the joy of a New Year celebration,” he added.

Ebdane also appended the title“Ragragsak Ditoy Zambales” to the festival in order to include the Ilocano-speaking municipalities in the southern portion of the province. Kalighawan opened on December 28 at the Zambales Sports Complex with a fun run for runners of all ages. This was followed by fun games like eggplant relay and novelty contests like “Takbong Paatras.”

The first day was also dedicated to senior citizens in the Second District of Zambales as Congressman Jun Omar Ebdane celebrated his birthday at the Zambales Sports Complex gymnasium with the “An A-Fair to Remember,” a day-long event that featured and health booths for the elderly.

Congressman Ebdane, who also sponsored a swimming competition for the youth, said the events were designed to highlight the provincial government’s priority programs for both the youth and elderly sectors.

The second day of the festival kicked-off with a cycling competition that started in the southernmost town of Subic and traversed the whole length of the Zambales provincial highway, finishing a few hours later in the northernmost town of Sta. Cruz.

Aside from this, festival organizers also scheduled on this day a hiking trip from Palauig town to Mt. Tapulao, the highest peak in the Zambales; a “sipit-sipit” bancathon in Botolan town; and a 4X4 trail expedition from San Felipe town to Mt. Pinatubo.

An open water swim competition was also held at Uacon, Candelaria, as well as an “Scubasurero” event that was simultaneously conducted in San Antonio town.

That same night, the Ms. Bilbiling Zambales 2012 pageant, a brainchild of Gov. Ebdane, was also successfully launched in Iba, with 14 “oversized” beauties from all over the province competing for the title. Ebdane said the pageant served as a counterpoint to the common notion that beauty pageants should only be for slim women. “That kind of contest is held everywhere, everytime,” Ebdane noted. “Tonight we want to show our appreciation of the ‘well-rounded’ beauties of our province. Let us remember that the paintings of old, by Michael Angelo, Leonardo da Vinci, and their contemporaries, depicted the ideal woman as full-bellied and large-bosomed figures,” he added.

The culminating events for the Kalighawan Festival was a “boodle fight” that fed some 15,000 Zambaleños and guests who trooped to the Zambales Sports Complex oval on the night of December 30 to celebrate the birthday of Gov. Ebdane. This was the biggest feast ever held in the history of Zambales. It was followed by a fireworks display that signalled the end of the three-day Kalighawan Festival. -30- 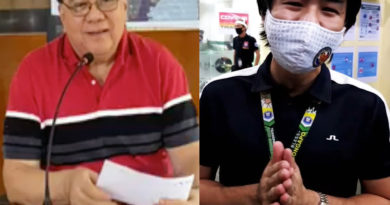