ALMOST 200 displaced employees who have not been reporting for duty after the forcible takeover of  Ocean Adventure and Camayan Beach Resort & Hotel received financial assistance equivalent to their full salaries on Sunday (5 March) afternoon from the management that has been eased out of the company’s premises.

“What we did today is the least management could do,” said Arthur D. Tai, president and chief executive officer (CEO) of Subic Bay Marine Exploratorium, Inc. (SBMEI), owner and operator of Ocean Adventure and Camayan Resort & Hotel.

Scott N. Sharpe, a disgruntled SBMEI stockholder, led a group that stormed the facilities on the night of Feb. 13, 2017, with armed elements of the PNP Special Action Forces (SAF), Morong, Bataan policemen and personnel of a non-SBMA accredited security agency.

Sharpe’s group has since been occupying and operating the marine theme park. He claims that a meeting of the “majority” stockholders has elected him to replace Tai and Board of Directors Chairman Dr. Robert C. Braun.

SBMA Administrator Wilma T. Eisma has condemned the takeover saying “The actions taken by the new management headed by Mr. Scott Sharpe were clearly not in accordance with proper and lawful procedures strictly enforced in the Freeport.”

In what appeared as a happy reunion, the employees received their salaries in envelopes from several tables laid one after the other at the former Mini Golf Course grounds beside Bldg. 229, main office of the Subic Bay Metropolitan Authority (SBMA). Tai gamely obliged to requests for selfies and group picture-taking by the displaced employees.

“Despite the illegal occupation of Ocean Adventure & Camayan by the group of Sharpe, we are happy that Mr. Tai remains sincerely concerned about our welfare as employees, including that of our families,” Archie Asio, 36, who has been with the company for over 14 years, told Subic Bay News.

The employees said they have not been reporting for duty either because they refuse to recognize the authority of Sharpe, or they are being harassed, while some said they cannot work with people brought in by Sharpe which include workers dismissed for cause in the past for anomalous or irregular transactions.

Tai and Sharpe’s group are locked in a dispute over the Voting Trust Agreement (VTA) that has reached an Olongapo City Regional Trial Court (RTC) that, saying it has no jurisdiction over the matter, dismissed the case for lack of merit.

However, Tai said that Sharpe’s group, despite having physical control of Ocean Adventure and Camayan at the moment, remains to have no access to company funds because the banks do not recognize his “illegal” takeover.

While the displaced employees are able to receive salaries, those working for Sharpe reportedly received partial or no salary at all, presently relying merely on funds from the day to day operations of the theme park.

Sharpe has claimed that his group’s actions were backed by a Court Order but to date, however, he has failed to come up with a copy. Sources at the Olongapo RTC confirmed that, contrary to Sharpe’s claim, there is no Court Order to takeover Ocean Adventure and Camayan Resort & Hotel.

Tai gained majority control of SBMEI by virtue of the VTA between him and Sharpe’s group which the latter revoked last year, a violation of the agreement, he said, because it provided that the VTA cannot be revoked earlier than 5 years, except for cause.

According to Tai, the revocation is invalid since there is no cause to revoke considering that in his over two years of stewardship, he turned the company from a bleeder into a profitable business, several-fold.

“When the company started to perform well under my administration, it seems they had a change of heart to get their hands on the company’s money,” Tai said, “SBMEI now has some P120 M in the bank earmarked for upgrade and expansion of facilities,” he added.

“In consideration of the company and the employees, I would rather have us settle the VTA issue between us, the trustee and trustors, and let the company operate and conduct business normally, as usual,” Tai said, “unfortunately, they have other things in mind.”

Tai vowed to pursue the matter in a lawful manner. “We will not do it (retake the facility) the way they did. We will not do it at night or under the cover of darkness,” he said, ‘we will do it with respect to the rule of law. It may take a while this way but we will not be like them. That is why I ask for your patience,” Tai appealed to the displaced employees.

Tai said he and other members of the SBMEI Board are conducting meetings, discussing, among others, the current situation at the company’s marine theme park.

Additional messages sent by Subic Bay News to the camp of Sharpe for further comments and/or reactions have not been answered as of this writing. -30- 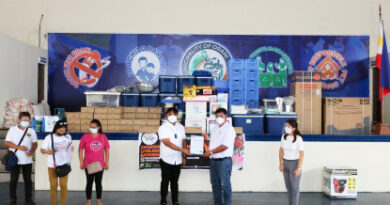 Business Delegation from China in Subic